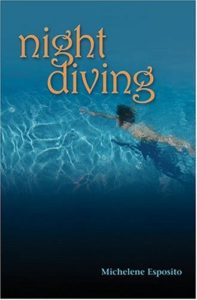 Night Diving is both a young woman’s coming-out story and a 30-something coming-of-age journey that proves you can go home again. It is the story of Rose Salino, a thirty-year-old woman living the San Francisco chic lesbian lifestyle, who loses her job as a chef and her lover on the same day. The next day her grandmother dies and in the course of returning to her hometown for a funeral, she sees her childhood best friend and first love, Jessie. They begin to rekindle their friendship, which later becomes a romance. Through a series of crises Rose is forced to look at her life and find the courage to create a future that is true to her real self and her heart.
With the support of friends and the hard lessons born from life’s challenges, Rose takes the risks to create a life she wants rather than the life she thinks she’s “supposed to have.”

“…a thoughtful and sensitive coming-of-age-and coming out-story, full of drama but balanced with enough intelligence and subtlety so that it doesn’t lapse into histrionics.”
—Library Journal

Buy it at Amazon | Barnes & Noble

For eight-year old May and her older sister Kate, the day that their mother commits suicide is a day that changes them forever. Unwilling to let that tragedy destroy them, each girl makes her own path through life. May grows up to be responsible and watchful, while Kate becomes reckless and dangerous.
Then one day Kate disappears and it is up to May to take a reluctant journey through her mother’s past in an effort to find her sister. Along the way, May discovers the truth about the choices and the compromises, the emptiness and the fullness, the beauty and the pain of love.

Buy it at Amazon | Barnes & Noble 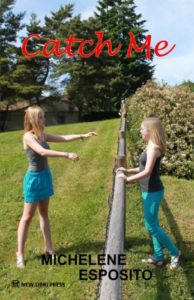 Becca Reese is just trying to get through her senior year of high school and accepted into college before her Career at Carvel nightmare becomes a reality. She’s a shoo-in for a spot at one of the Ivies—at least that’s the general consensus for a brainiac like Becca. She tries not to stress it. After all, since her parents split-up two years ago (finally!) life isn’t bad. No one’s screaming at each other and slamming doors. Her brother Jack says the cutest things. Her dad, Stu, is always handing out the Guilt Dollars and, of course, there’s her mom, Claire, and her comic-relief internet dating.
But then every (every!) one of the Ivy League schools she applied to rejects her and she’s stuck with her joke back-up school, Pitzer (can you say Ultimate Frisbee Team? Go Stoners!), in (yes, it gets worse) Southern California.